The development of a general focus or direction of a baroque luthier making period instruments and the resulting workshop philosophy is an evolving, gradual process,one which which is never fully completed. In nearly two decades of lutherie, I am still daily making explorations in sound.  As you may have already noticed, all my instruments are inspired copies, or personal models based upon Venetian, or other schools of lutherie. I do not use arching templates, or drill depths from predetermined technical plans. This is as every single piece of tone wood possesses wonderfully different qualities, and to slavishly copy a famous instrument from technical plans often results  in something which is lackluster in both visual and tonal appeal. Part of the excitement of making baroque and period instruments is that the arching height, outline, and shape deliver wide variances of tone, and are hence more multifarious and filled with endless possibilities as opposed to the rather tepid and boring arching of Antonio Stradivari and some other instruments of the Cremonese school.

My interest in music goes back to an early age, when I began keyboard studies at the age of five. Although in my heart I remain a violist, I still compose music for early keyboard instruments, and have a great fondness for the clavichord.  In 2003 I studied musical composition at Freie Universität in Berlin, Germany.

Upon finishing apprenticeship as a young man, and much against the advice of my mentors, I decided to focus on making mostly violas in both baroque and modern setup. 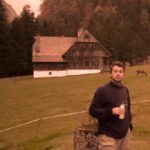 I began to setup two workshops in both Vienna, Austria, and in beautiful Alto Adige, just north of Trento, Italy.

The focus of the workshops in the past few years has been on building unique instruments, primarily violas and  violoncellos. My growing fascination and interest in the baroque cello has led me to study historic instruments with the aim of using the exact methods of construction which would have been used in Baroque and Renaissance periods. Whenever possible, I  pay close attention to neck attachment methods, arching, rib depths, and all other aspects common to the particular school of lutherie I am working after. 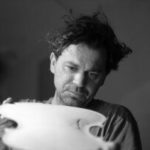 What makes the perfect Baroque Instrument?  Attempts to divine a clear conception of authentic tone for musical instruments will seemingly always remain subjective.  While more research on historical instruments, iconography in baroque paintings, and contemporary texts can illuminate more clearly how instruments in the baroque and renaissance were constructed and used for performance, the fact remains that an attempt to conceive a sense of setup, sound, and historical performance is an evolving process.  Developments in both string technology and tension/setup relation of historical instruments are the first and primary considerations when choosing a target period for an instrument.  A profound difference in sound and timbre of tone can be achieved by having a clear vision in mind of what is desired tonally, and moving forward from the first stages of choosing tone wood, down to final setup.

I generally divide my instruments into four categories based upon the target period, and thus the strings are the primary factor for every aspect of the instrument. It may seem odd to design a instrument based upon the characteristics of the strings, however it is crucial to understand that the tension, composition, and pitch of strings directly effect how I will go about creating the arching, plate graduation, and even choice of materials and outline.

Late renaissance, in which all gut and equal tension strings are employed.

These are most often designed upon Venetian pitch and for violin and viola, and can be thus higher at A440 -A465. 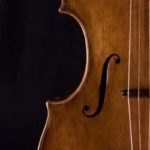 The gauge of these strings tend often to be very thick, requiring a different bowing technique and experience. Recent violas with all-gut, late Renaissance setup made in the Vienna workshop have been wonderfully resonant instruments.

Michael Praetorius, in Syntagma Musicum supplies the tuning for bass violins at the common tuning of violoncello C-G-D-A , however other sources such as Mersenne provide the possibility of a lower pitch at Bb-F-C-g, which is a whole tone below the cello and goes in accordance with the information gathered about the basses used in the Lullian orchestra, from Georg Muffat and other sources.The deepest of these can measure around 4mm thick in gauge if we assume that equal tension across the strings does in fact produce equal feel if the twisting increases progressively the thicker the string is. Other tunings, including the standard cello C-G-d-a, may also be used, depending on the acoustic and technical needs of each particular repertoire and situation. A recent  Violone commissioned by the Early Music Department of McGill University presented a unique challenge as the performance needs for that instrument required the lower, Bb string to possess agile, expressive qualites with a string legnth of 80cm. 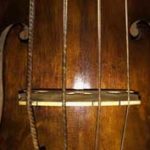 Such an instrument is based on the string technology that was available at the time; instead of having metal-wound strings in the low register, there would have been very thick and highly twisted gut strings.  In other words, the ratio between tension required for low pitch, acoustic damping and flex/suppleness (controlled by the size and twist of the string) must be correct. Luckily, we now have such strings available to us again thanks largely to the historical research of George Stoppani and Oliver Webber, with firms like Pure Corde producing strings of great stability and quality.

Mid to late baroque (hence after the invention of wound strings in Bologna ca. 1660.)

Luthiers would typically finish their own string windings,  thus with full control of the materials which were would over the  gut core made from sheep or oxen. This very special and close relationship to the composition of their strings certainly enhanced the acuity of experimentation.

Especially fascinating was the ability to produce smaller violoncelli with more clearer, penetrating voices, setting the stage for them to become obligato instruments. The line can be very unclear between early and late baroque instruments as regards to their setup; there was no general announcement to have your instruments serviced,  ebony-veneered fingerboards installed, and switched to wound over gut strings. Patrizio Barbieri has written a fascinating article on the Roman Gut String Makers here which can be downloaded in PDF form should you wish to read more.

As often as possible, I employ the methods of building which were used in the region and based upon the target period I am after. The majority of modern makers today begin work on an instrument with the premise that a “baroque” instrument is merely composed of a shorter bass bar, neck root, and bridge design. In reality, historic instruments survive with neck lengths which are close to modern. Bass bars also display wide diversion, and their length, position, thickness, by no means were standard. Generalizations about setup of musical instruments abound. The usual result is a very thin sounding, scratchy, or dead tone, similar to when one simply puts gut strings on an instrument with modern setup. From the first stage of choosing model, form, and arching templates, to the final plate tuning, varnish, and setup, my instruments are from beginning to end conceived with my own particular aesthetic for perfect tone. This is primarily a sound which is sweet and identifiably antique, however also with clarity, focus and balance of sound, and equal projection.

There is nothing more unnerving than hearing a Mozart violin Concerto performed with a multitude of steel core strings. My ear is more accustomed to a viola sonority and thus tender; easily bruised by fortissimo passages with a shrieking cacophony of steel E strings (!) My transitional setup instruments have morticed necks (not nailed) or employ neck-as-block attachment. These very versatile instruments may be designed with more tension and fingerboard projection may be more pronounced depending on the performance requirements of the musician.  On most of my instruments with transitional setup several different pitch strings may be used. Very well suited to repertoire of both Classical and late Baroque music performance, the effect can be nothing short of divine for chamber performances accompanied by period keyboard instruments.

I am usually after a soloist tone, especially with the violins.  There is a vast difference between “loud under the ear” and a tone which projects within large concert spaces without thinning.  Within the past two decades I have produced some very lovely-sounding modern setup instruments, many of them violins.

A special place in my heart, and an omnipresent relationship to the muses exists when it comes to making violas, whether they be with late renaissance, baroque, or modern setup. Violas are particularly exciting  for me as there is truly no fixed aesthetic for what constitutes a perfect tone. A particularly rich opportunity for exploration exists, and though I have made something close to over 100 violas ( I am no longer counting) the process is far from being finalized. One can listen here to one of my early large tenors with modern setup, please however keeping in mind this is a recording with poor microphone quality. The performance however is fantastic considering it was done with one take, without rehearsal.

All of my varnishes are carefully handmade, prepared only from ingredients found in Nature.  A diverse array of materials – such as Saffron, Madder (Rubia tinctorum) Alizarin, Lavender oil (Lavendula latifolia.) Orleon, sandarac, and Dragons Blood – are combined and hand prepared to create beautiful results with very convincing antique effects.In order for a luthier to succeed in his pursuits, an ability to practice many disciplines in needed. All at once he is  historian, poet, craftsman, and, with the endless curiosity towards developing unique varnishes, chemist.

My finishes are in general antiqued, with a tasteful blending of tool marks. I prefer to use older wood and often age my instruments without varnish for many months to achieve an authentic patina.

Although it is well documented that many golden period luthiers produced fabulous and now legendary instruments using freshly harvested tone wood, I generally prefer to use older materials. The very minimum seasoning time for the plates of my instruments is 10 – 12 years. For my baroque violas I have a preference for slab cut maple or willow, however also use poplar and maple with less figuring if possible. For the top plates I tend to be even more selective, and prefer to use Italian spruce aged up to 25 years. Alternative materials such as willow, cherry, and Spanish cedar have also played an important role in some of my instruments when the particular damping qualities of these materials were required for my own or the musicians final vision of sound.

For selected instruments I have just acquired a limited stock of spruce harvested in 1800-1820. This fabulous material has a rich, golden brown patina of age  all the way through when cutting, and is a dream to work with. 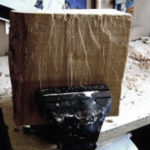 I prefer to create my own bridges and designs, as opposed to using factory bridge blanks. The bridge stock material from factories is often kiln-dried, and thus new wood, with age unspecified. Contact me and start a dialog to discuss your particular dreams for sound. 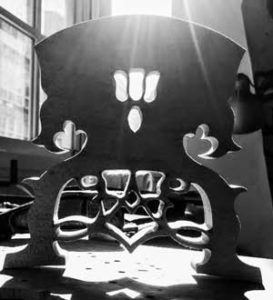