Most often when I engage in dialogue using the term Violoncello Piccolo and those with either small corpus, or any five string violoncello, the musician will often say… Oh you mean the instrument created by Bach to play the 6th Suite!

The reality regarding violoncelli with a petite corpus and their relationship and context within performance is just a bit more complicated. Bass Instruments with five strings can be found in both iconography and texts, and would served an important and complex role within musical performances of the time.

The first use of the term Violoncello comes not surprisingly from Italy, ca. 1660’s in Giulio Cesare Arresti’s Sonate A 2.& a Tre Con la parte di Violoncello a beneplacito. One may note that this coincides with the Bolognese invention of wound strings. His predecessors in Italy before the mid 17th Century used a wide variety of terms for bass instruments: violoncino, bassetto viola, basso di braccio, violone……

Before the invention of silver or other metal wire wound over gut string, bass instruments would have most often been quite large in corpus and string length, due to the large amount of tension needed with pure-gut strings. A Corpus of around 77- 80cm was common, however not always the case. Smaller corpus instruments certainly existed if we are to go from iconographical images.

In this image from 1609 we see pure gut strings on a 5-string bass instrument which is remarkably close in outline to violoncelli of that late baroque and ones we are used to today. Note the unique playing position. Female musicians certainly could not be expected to play with the instrument between spread legs(!)

Wound strings allowed luthiers to experiment with smaller corpus instruments, and the new clarity of voice of these strings allowed musicians to use the violoncello with more virtuosity, no longer relegated to the first position by the need to support the weight of the instrument with the left hand. After Bologna, the news would have spread rapidly of these strings. First within Italy, then in France, Germany, England, etc. A kind of wild west period of experimentation  then ensued, with corpus lengths and string lengths seemingly haphazard. 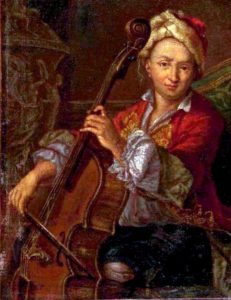 It is true that  J.S Bach and J.C. Hoffman were close friends , however the surviving instruments present something of an anomaly in relation to the performance of repertoire composed by Bach.  Later in the 19th Century, it is understandable how a semantic confusion could have developed, as this actual instrument has a corpus size of only 45cm.  Indeed, it is not much larger in body than a tenor viola, thus the erroneous later moniker of “Viola Pomposa” 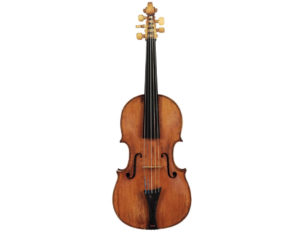 The Hoffman violoncello piccolo made in 1732.

On first glance, the instrument simply appears to be a typical five string violoncello. When you examine the actual dimensions of the instrument however, it becomes clear how the instrument could have developed the name Viola Pomposa, Here you can see that the actual length of the neck of the Hoffmann instrument is not much longer than a modern viola neck 19th Century expansion of the string length at the neck, along with regraduation of the plates has unfortunately transformed the 1732 instrument into a curiosity which offers no tangible evidence towards further clarification of its original use and tuning.

Only after Bach’s death did the misnomer Viola Pomposa occur in printed sources, and several 19th Century authors mistakenly refer to Bach as the inventor of the violoncello piccolo. When one begins to study paintings of baroque and late Renaissance instruments, it becomes fairly clear that piccolo violoncelli of 5 strings were a more than common occurrence in the musical life. 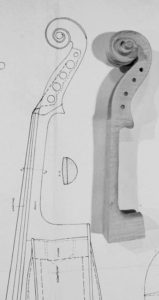 It is important to realize that Bach’s instrument in the Suites was a true bass/tenor instrument, and surprisingly, the original instrument made by Hoffmann has a very rich bass range, albeit with a touch of the “bassoon-like” quality which is inevitable with such a small corpus length. While there seems to be a peculiar inclination towards middle-range instruments in Germany and Saxony in particular, the Hoffmann anomaly shares more traits with the common tenor viola.  When we consider the wide variety of names for bass, (and bass/tenor) instruments in Germany, the situation becomes very confusing….Bass Geig(e), Faggotgeige, Bas-Geige de braccio, Violonzell, Bassetl…among others.

When we understand that 5-string violoncelli were more common than one would think, and that the choices for controlling tone with arching, wood selection, air volume of the corpus, and vibrating string length, an entire new world opens up for the baroque luthier. in my mind, Stradivari’s general standardization of the cello corpus at around 75cm was no great boon for cello performance, or lutherie in general. These voices, once important parts of musical culture, have essentially been lost to us today.

Lost voices. Combinations of arching height, tension, vibrating string length to corpus, wood with or without damping qualities… interior varnish treatments… strings with wound silver, or all gut…..bridge height and tuning of bridges in relation to all the above. The possibilities are endless, and endlessly exciting. What voice do we want to achieve? How do we get there. I am fascinated. And the fact remains, we have just begun.